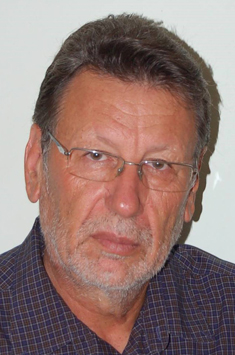 Emmanouil Stefanoudakis graduated from the Pedagogical Academy of Heraklion, Crete and subsequently studied psychology at the University of Lyon 2, France. At the same University he obtained a postgraduate degree in D.E.S. (now called Master 2) in Clinical Psychology – Psychopathology. He also obtained a postgraduate diploma in Social Psychiatry from the Democritus University of Thrace, Greece. He is a psychoanalyst, trained at the Hellenic Society of Psychoanalytic Psychotherapy (HEPPS), of which he is a currently a lecturer. He is also an associate member of the Institute of Classical Psychoanalysis.

He has been trained in group psychoanalysis and psychoanalytic psychodrama by members of Societe Francaise de Psychotherapie Psychanalytique de Groupe (S.F.P.G.) and has been a member of S.F.P.G. since 2017. He is also a regular member of the Hellenic Society for Psychoanalytic Group Psychotherapy. He has worked for many years as a Clinical Psychologist at the Society of Social Psychiatry (Head of this Department was Professor of Psychiatry P. Sakellaropoulos), at the Children’s Psychiatric Hospital of Attica and at Venizelio – Pananeio General Hospital of Heraklion. He has published articles in collective books and magazines on psychoanalysis, psychotherapy, psychiatric care and has presented research and psychoanalytic work at Greek and international conferences.

He was a scientific associate and clinical supervisor at the Psychiatric Clinic of the University Hospital of Heraklion, at the Student Counselling Center of the University of Crete, at Venizelio General Hospital, etc. At present he has a private practice in Heraklion. His areas of specialty include individual Psychoanalysis, Team Psychoanalysis and Psychoanalytic Psychodrama. He also supervises clinical work in organizations and companies providing Mental Health and in Refugee Centers.